Showing posts from April, 2011
Show All

April 27, 2011
Just a quick update on planned holiday dates. I will be away from 22nd May until 5th June inclusive. I will obviously not be sessioning, but also I will not be checking emails or taking calls during this time....I will be too busy sipping wine and sitting in the shade reading and avoiding tanning my milky white skin. Due to unavoidable circumstances I'm putting my trip to Kilimanjaro on hold until next year. In the meantime I'm still hoping to raise some funds for Marie Curie Cancer Care and will be doing the Edinburgh 10k again this year in aid of this charity. Anyone wishing to sponsor me can pop a donation into my collection box at my premises. All donations will be gratefully received.  Again this year I am auctioning off a 2 hour session with all proceeds going to the above charity. Anyone wishing to bid please email me before I leave for holiday on Sunday 22nd May. As before, I can only take bids from people I've sessioned with before, this ensures compatibility.
2 comments
Read more

Being fully bound and mechanically raped! 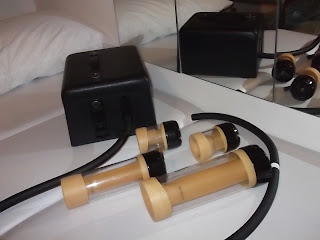 This is the scenario I've been playing around with since I've bought my new toy, Mistress Venus. Now that I've let the cat out of the bag it's not going to be such a surprise any more to bound up slaves. However, in the past few weeks I've enjoyed the control and thrill of using it on a fully immobilised specimen when they are hooded or blindfolded and have no idea what I'm doing. I've been told it's quite a head trip...and that's before I start mucking about with the controls. I enjoy making it go faster, getting you worked up to the point of almost there....and then taking it back to almost nothing. Just enough for you to feel it, and then let the pressure build up slowly again. I've had one person beg and plead with me to either let him cum, or stop, as the orgasm tease and denial were just about too much for him. Of course I only did what I wanted to do, and when I wanted. With much hilarity on my part. I also like whispering to them about
5 comments
Read more 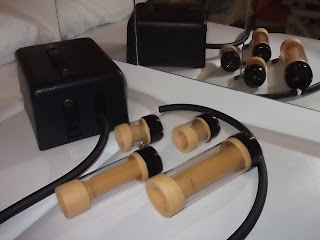 Whichever Goddess of Love you worship, Greek or Roman I bet she won't thrill/exhaust/exasperate/freak you out anywhere near as much as my new Goddess and partner in crime....Mistress Venus 2000. Ok so she is officially called the Venus 2000 but you can call her what you like. I'm quite partial to calling her my mechanical rape machine.......she likes to rape, and keep on raping you until you beg, and I feel the compassion to stop. Then and only then will you get a rest from her attentions. However, I'm so fond of attention that I've taken to scrutinising exactly what you have produced, all in the name of medical science you understand. So the specimen produced is routinely examined and anylises under the microscope to check for mobility, fertility and virility......and of course for my amusement. More on this later. I'm off now to mechanically rape and deseed another poor unsuspecting labrat. As I said, all in the name of medical science....I like to do m
2 comments
Read more 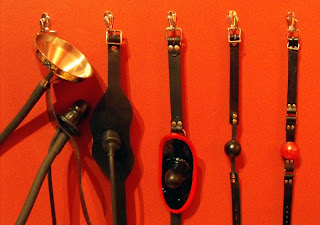 A small collection of my gags.... Gags are sometimes so underrated, almost like an afterthought. I've done sessions where gags have been the main theme of the session. Admittedly it was with someone who loves gags...in fact you could call him a gag slut. So I wanted to talk about the different gags that I like and the benefits of each. Gags can be split into two broad groups. Those that fill and invade the mouth, and those that hold the mouth open. I'll start with ball gags. They are what most people think of when first mentioning a gag. Recently one even featured in .Rihanna's S&M video. They come in various sizes so that even someone with a small mouth can find one to fit. They made the wearer drool, which can be embarrassing for them and amusing for me. These are a good starter gag to see if someone can tolerate a gag without too much difficulty. I usually like to start someone off with a ball gag and progress from there.....moving up sometimes to bigger and b
11 comments
Read more 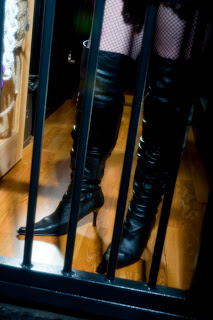 I have to apologise for my lack of input here. I've been busy lately and a tad distracted. Things have settled down a bit now and I'm hoping to manage a few creative posts soon. In the meantime here are a few pictures to stop you all getting bored....:)
2 comments
Read more
More posts